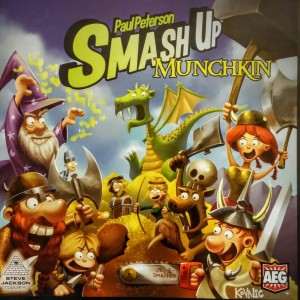 I really love Smash Up. It is easily one of my favourite games that nearly always makes an appearance at a games night. I have bought all the expansions and I am working my way through all possible combinations (666 possible combinations up to this expansion). I wasn’t a big fan of Munchkin. I played it quite a bit, but the jokes wore thin quite fast and the constant backstabbing that prevents you reaching level 10 gets annoying after 10 minutes and bordered unbearable after 20. So I was slightly dubious about this stand-alone/expansion. Thankfully I was wrong to be dubious; it is a really good expansion bringing in some new features.

First of all, Smash Up Munchkin features eight factions – Clerics, Dwarves, Elves, Halflings, Mages, Orcs, Thieves, and Warriors–which Munchkin fans should recognize as corresponding to races and classes from the card game. This means it can be a stand-alone game supporting 4 players out of the box. There are no race/class restrictions on choosing your combination in Smash Up, though: Elf Halflings and Dwarf Orcs and Mage Warriors are perfectly acceptable combos.

Munchkin-style Treasures and Monsters add a new twist to the gameplay in this version of Smash Up. Treasure cards contain both actions and minions that you add to your hand when you receive them and play like any other card, Monsters are minions that are played on bases and the increase the breakpoint of the base equal to their power. The Monsters also have a Treasure value and certain abilities. Through various actions, monsters can be defeated individually, earning treasure cards for the player who does so. There are also ways for players to take control of monsters on occasion, so that the monster’s power value counts against the base rather than in its defense. The monsters can pile up pretty quickly on bases, making for some daunting takedown goals, particularly early on in the game. Once you break a base containing any monsters, you divide the treasures between all players on the base – even those who didn’t manage to score – starting with the player who had the most points after any specials have been played.

It is worth noting is that all of the Monsters and some Treasures are considered minions, whether or not they’re actually under control of a player. So, for instance, if a card says “destroy a minion here,” you could use it to either destroy another player’s minion, like you would in standard Smash Up, or you could kill a monster and get the amount of treasure specified as well. It does also mean that any cards saying “+X to all minions here” would boost the monsters as well as the player’s minions.

Smash Up Munchkin comes with eight 20-card faction decks, 20 monster cards – with red backs as opposed to yellow which helps distinguish between Bases, Monsters and Treasures on the table, 22 Treasure cards, 16 base cards and an assortment of 1VP and 5VP tokens. All the art is done by John Kovalic and then stylized by other art studios. It really catches the Munchkin feel (as it should, they are drawn by the same artist) but has a Smash Up feel to it as well.

The box also includes 10 plastic deck dividers for sorting factions, monsters, and treasures, which are useful if you’ve got the Big Geeky Box expansion. Even though this is a stand alone game; it doesn’t have the same insert as the original Smash Up, it is basically a bigger version of a standard expansion insert. Which means sorting is not as easy as it was in the original Smash Up.

Like existing Smash Up expansions, you can combine the cards from Smash Up Munchkin with the original Smash Up and all the rest. One of the things I was worried about would be that it doesn’t balance well having factions that don’t interact with Monsters and Treasures because they were released before hand, but in the many, many games I have played it has not caused any major issues. Because the Monsters are also Minions it isn’t impossible to destroy or move them with other factions.

The instruction booklet does point out that, with the Smash Up world now up to 37 factions (plus 4 more factions and a special Shark delivery system from It’s Your Fault), a game’s base deck should be built using only the bases from the sets of the factions in play, since each set comes with bases designed specifically for use with its factions. If you just shuffled all 74 bases together, chances are slim that players would get to see the bases best for the factions they’re playing–there wouldn’t be as much fun in using Smash Up Munchkin factions, for example, in a game that never sees a base involving monsters and treasures

I really enjoyed the pairing of Smash Up and Munchkin, which feels natural, given both games’ sense of humor, numbers-building strategy, and good-natured interference with other players’ efforts