Before I start this review I feel that I need to add a caveat, I love word games, always have and always will. The problem is I can never get them to the table because my friends and family are less excited about playing them, especially against somebody who loves them! When I saw paperback I was excited to buy it but less optimistic about ever getting to play it…… Maybe I could hide the word game by selling it as a deck builder, who knows. 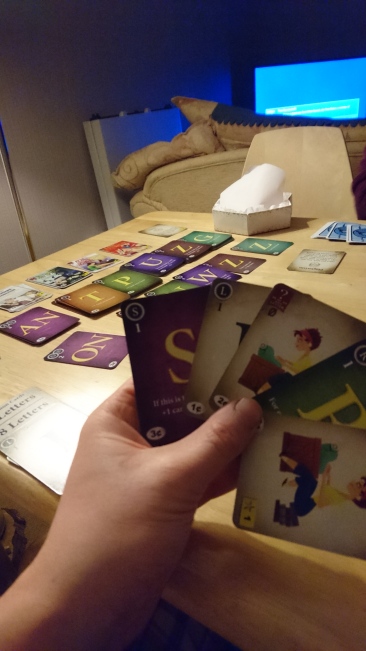 The first thing I should mention about this game is the quality really hits you right from the box, it’s a hard thing to put into words but as soon as you pick it you can just feel the thought and love that has gone into the entire design. From the understated cover art with its retro tongue-in-cheek book covers to the snugly fitting linen box with its well thought out dividers, this game is both understated and cool. It may even what the kids would call hipster. This first impression gave me my first inkling that this might actually be a word game I would get to the table!
Having lured first of said victims (my wife) into playing I delved into the rules and hurriedly set it up before she would notice. The setup is a breeze with clear illustrations and a lack of useless jargon which so many other deck builders suffer from. The cards are minimal in style and functional, within 10 minutes we were ready to start. For our first game we opted for the simplest version, just to get our eye in with the mechanics and to get a feel for some general strategy. For the first couple of turns the game can seem a little underwhelming, it uses the tried and tested deck building mechanic of draw 5, play cards, buy cards, discard, redraw which was fine, just not particularly exciting. 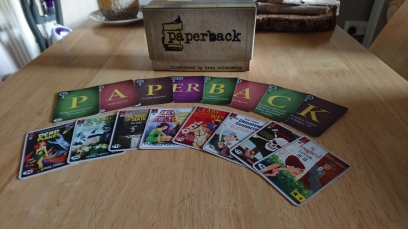 After a couple of turns recycling the same words and slowly adding cards to your deck you start to get a feel for what the game is about. Many of the cards have powers which allow you to draw more cards, buy cards cheaper or trash them out of the game completely along with a range of other different actions. This is where the game comes to life and the decision making process is so rich with options your brain goes in loops trying to work out how you can get 7₵ (the game’s currency) to buy that letter F with a draw 3 cards action.  It was once the decks were taking shape that the game’s real potential was realised, this isn’t a game of showing off how extensive or exotic your vocabulary is. Being able to make big words helps but is by no means the only route to victory as I found out to my detriment. Having collected a bunch of double letter words I was left hopelessly trying to match up totally incompatible cards whilst my wife was slowly growing the length and score of her words through carefully acquired letters and actions.
The game lasted about 40 minutes and it was time for the final count up. The game ends when either somebody has made a 10 letter word or 2 of the fame decks have all been bought. Ours ended via the fame decks which were providing my wife with the wild cards and ultimately victory points she needed. I don’t remember the score (honest) but it wasn’t pretty………
Never the less I really enjoyed paperback and it has come out with great success at every games night since, including one at the games night in our local pub. I even managed to persuade 2 of my friends who professed to “hating” scrabble to give it a go and they both genuinely loved it and found it far less confrontational and pressurised than other word games whilst still giving you that satisfaction of piecing together ever more impressive words.

In short this is the best word game I have ever played and it is one I know will end up as one of my most played games of the year due to its ease of play, broad appeal and cool appearance. If I was going to be super critical the theming may be a little bland for some, it sells it as you are trying to write novels to gain fame but you never really get that feeling in the game but for me this doesn’t detract from the fun. There is a load of stuff in the box I haven’t even delved into yet including additional powers, rewards, bonuses, rules and even a cooperative and simultaneous play mode.

Print runs are a little limited at the moment but if you get the chance I can’t recommend this game enough if you are at all interested in word games. Even if you’re not it will look cool on your shelf and top up your hipster level.