“Please don’t, I beg you. Please, please no. Anything but that. Anything else. Just leave my brain alone..have some humanity! For Pete’s sake, NOT MY BRAIN!” ..is the reaction of most people to maths games, in my (considerable) experience. Zombies, on the other hand, are just fine and dandy. Oh, people love zombies. You can simulate the brain-eating as much as you like – all gross and gory and gelatinous – so long as you don’t actually consume their actual brains with something tricky, like maths. So I was intrigued to play City of Zombies, a game that claims to combine both. 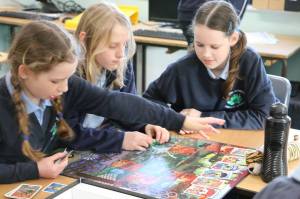 City of Zombies is, ostensibly, a game for kids. It looks cartoony and not too sanguinary, and the character roles are kids, with (sigh of relief) a nice gender balance and a nod away from stereotypes. I’m always on the lookout for games that I can play with my kids that satisfy us both. Interesting, strategic gameplay for me, and er… interesting, strategic gameplay for them, because my kids  – and kids in general– are not morons. Far too many games out there assume children enjoy monotony and dice rolling and aren’t capable of making tactical decisions, probably because they often can’t at a young age – but games are the cure, not the symptom. Good gamers are made, not born, and they are made by modelling. Kids too young to play yet? Let them watch you think hard and furiously about games. Let them watch you plan and plot and scheme and smirk over a game. Let them watch you stab Daddy in the back (metaphorically), and win, and shake hands graciously and make him a cup of tea. And as soon – the very minute – that they are big enough to think for themselves, let them play, and lose, and play again until they beat you and life is perfect and you have a ready-made gaming group without having to even step outside your home.

Anyway, after that digression. In City of Zombies, a co-op for up to 6 players, you roll dice and manipulate the numbers to hit the zombies. The player whose turn it is gets the final say, but everyone gets to talk together and discuss strategy and maths. More zombies spawn, you try to clear the path for survivors, and by the time the plane hits the runway you hope to get as many people out alive as you can. It’s a deceptively simple concept based on the sound, creative mathematical idea of “what CAN I do with these three numbers?”, but what makes it more than this is the decent mechanics which add a pinch of unpredictability and danger, as well as character abilities which help every player to contribute. 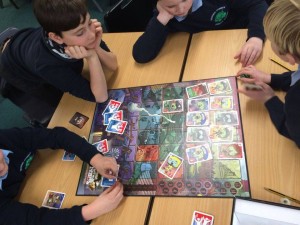 So far, it’s not ground breaking stuff. But a game – a real gamers game – that uses maths well, no matter how simple, really is ground-breaking, and I’m starting to become interested in City of Zombies because I think it just might have the potential to do just that. Major plus points of this game are the easy ability to add or subtract (see what I did there?) complexity, the co-op element, and the appeal for kids. I’ve seen this game played in classrooms as well as tested it with a handful of kids myself, and they like it. It’s also easy to make the game shorter if you’re pushed for time, and differentiate for ability. Where it falls down for me is that it doesn’t yet deal with negative numbers or more challenging mathematical ideas – unless you are confident enough, as a parent, to teach them alongside gameplay – and there is always a problem of alpha-parent-gamer-bullying, which can be exacerbated by the fact that it uses maths, making people prone to insecurity and therefore humiliation of others.

It’s a fantastic tool for use in the classroom but equally good for parent and child bonding, as long as you are sensible enough to be aware of the potential mathematical pitfalls (squaring isn’t the same as doubling, for instance) and deal with your child sensitively so as not to ruin the enjoyment of the game. With a little homework, this could be the best way available to practise basic arithmetic at home with your child in an enjoyable fashion, and I don’t say that lightly (I’m a former maths teacher).

My verdict? Let City of Zombies consume your child’s brain, and you may well be delighted by the outcome.